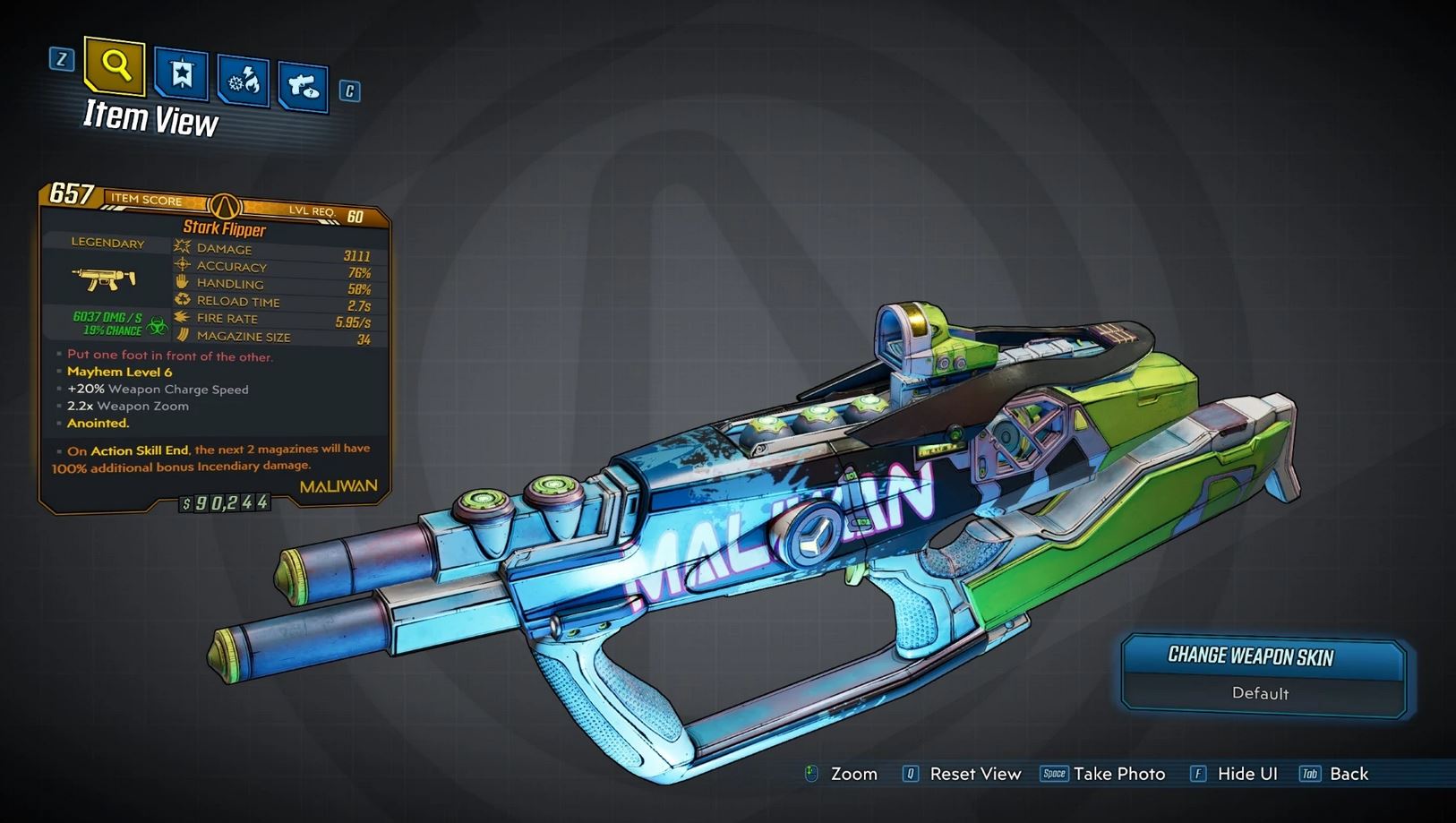 Maliwan is one of the most saught after weapon manufacturing company in Borderlands 3. They pride themselves with their weapons having high elemental damage that just tears any up enemies you encounter. Honestly, if you are using Amara or Siren, then you should definitely have atleast 1 Maliwan Weapon in your arsenal. Here I have listed the top 10 best Maliwan manufactured weapons in Borderlands 3.

At number ten comes the Insider. It is a legendary shotgun that can deal a high amount of damage. Unlike other Maliwan weapons, charging is not essential for this shotgun. As you shoot it will project out numerous elemental bullets towards the enemy.

These bullets move forward at a mediocre speed. As these bullets land on an enemy, they will generate an elemental explosion. The elements that the bullets are of are shock, incendiary, corrosive, cryo, or radiation. With every shot fired it can consume about 2 to 4 ammo. The Insider consumes ammo quite rapidly but can deal a huge amount of damage with each shot that lands on an enemy.

It has quite a high recoil and will take time to handle this shotgun. As it is with every shotgun the Insider is best when used for close combats. You can obtain this gun from any random enemy that appears in the Guns, Love, and Tentacles DLC.

D.N.A. holds the number nine spot. This is a legendary submachine gun that can resort to elements such as incendiary, shock, corrosive, and cryo. This submachine gun can fire two projectiles of a random element that are linked to each other similar to the cutsman. These linked projectiles will move forward in a spiral motion resembling DNA. It has a reduced firing speed and the reload speed and charge time are increased.

The projectiles move forward slowly and also take some time to split hence it is best used against slow-moving enemies. Using it for mid-range opponents proves to be effective. Its base damage is quite low but it can stack elemental damage over time when it is used for mid-range combats. Using it on close-range combats will not be as much as effective as on mid-range. The D.N.A. can be obtained from General Traunt at Mayhem 6 or above.

Red text – “I had not thought death had undone so many. “

Next comes the Hellshock. It is a legendary pistol that is always equipped with incendiary and shock elements. You can choose or switch the element of the projectiles using the alternative fire option. The projectiles, when fired, will have the chosen element and if bounces it will change to the other element.

Its fire rate is also high and consumes one ammo per two shots fired making it a great DPS. You can also utilize its bouncing property when needed, just shoot at the feet of the enemy and it will bounce and change its element.

There might be a delay while shooting as this pistol requires charging, to decrease the delay just keep on pumping the trigger. But by doing so you will not be able to sprint. The Hellshock has a higher chance of dropping from Vermilingua from the Splinterlands on Pandora.

Red text – “This little light of mine…”

At number seven comes the legendary pistol Beacon. As it is with every Maliwan weapon it also needs to be charged but after every charge, it can shoot out a burst of projectiles. The feature that outshines it is that with every reloads it will generate a Nova blast that takes up the weapon’s current element.

This weapon synergizes well with Zane’s clone as the clones can also trigger the Nova blast. While using it with Zane’s clone you might want to take a Transformer of Red Suit shield as the blast deals splash damage and you might also take damage. The Beacon has higher chances of dropping from Jerrick Logan from Bloodsun Canyon on Gehenna.

Next comes the Kyb’s Worth. It is a legendary submachine gun that can generate a healing aura. With every enemy that you kill, a healing aura will be generated around the fallen enemy once every ten seconds. The healing aura will only generate if you take down an enemy with projectiles and not with any kind of elemental effect.

Red text – “Get him angry and he’s bound to erupt.”

At number five comes the sniper rifle Krakatoa. For a sniper rifle, the Krakatoa has a high fire rate and can deal a huge amount of damage. Upon killing an enemy with this weapon a volcano will spawn in the location of the fallen enemy.

The volcano will spit out a fire that deals damage to the enemies around. Although the volcano will not spawn if you take down an enemy a few metres above the ground. It can deal incendiary damage every time and this works in perfect harmony with its high fire rate. With its huge damage, you will be able to take down enemies with a single critical hit.

This sniper also needs to be charged but you can reduce the charging time by quickly pumping the trigger keeping it close to firing every time. This weapon is best used from mid to close-range combat and it will not work efficiently when used for long-range combats.

It synergizes well with Moze’s Forge keystone skill making this sniper similar to an assault rifle. This weapon has a higher chance of dropping from Tumorhead from Lectra City on Promethea.

Red text – “Put one foot in front of the other.”

No matter how many projectiles it will fire the ammo consumption will not increase. The projectiles will move towards the enemy in a diamond pattern. This weapon is best for close and mid-range combats. This weapon has a higher chance of dropping from Minosaur located in Bloodsun Canyon.

The Crit is a legendary submachine gun that has an insane amount of damage. It always has shock element and has 150% critical hit damage. It also provides with lifesteal of 8% of all the damage dealt. Its damage output is so high that it has one of the highest damage per second in the game.

The high damage output with the lifesteal ability makes it a very effective weapon. If your shots can hit the enemy continuously, you will constantly be getting healed and the damage of the incoming projectiles won’t even budge your health. But with these crazy abilities comes a downside, while you are reloading it has a chance of slipping and dropping.

So, reloading while using this weapon is not a good idea. Make use of skills, artifacts, and class mods that can increase the magazine size to use this weapon effectively. Acquiring this weapon is also easy as it can be obtained by tipping Miss Moxxi aboard the Sanctuary III. Making it easier for you to access it early on in the game and making it easy for you to take down bosses.

Red text – “Your brain is a creative computer.”

At number two comes the legendary sniper rifle Complex Root. This weapon can spawn about 13 projectiles with every shot that will travel towards the target on a zigzag pattern. The projectiles will explode when it hits an enemy or there is a limited time as to how long it can travel and it will explode if it reaches that point.

The projectiles move forward at a slow speed. This weapon is best when used in mid-range combat. If used for long-range it will not be effective as the projectiles don’t travel that far and using it at close-range poses a threat as you might also get damaged with its explosive type of damage. This weapon has an increased chance of dropping from Lani Dixon located in Ashfall Peaks.

The Plasma coil is a legendary submachine gun with high damage output and is equipped with a high fire rate. It is always shock and radiation element and deals splash damage. It can fire 16 projectiles towards the target and this mixed with high fire and high damage will just melt enemy health in an instant.

Just shoot whatever comes in your way with this weapon and take advantage of its insane damage. It can be obtained from any suitable loot source from the Stormblind Complex on Pandora in course of the Arms race mode. There is a higher chance of obtaining it from the Red Chest at location B on the map.