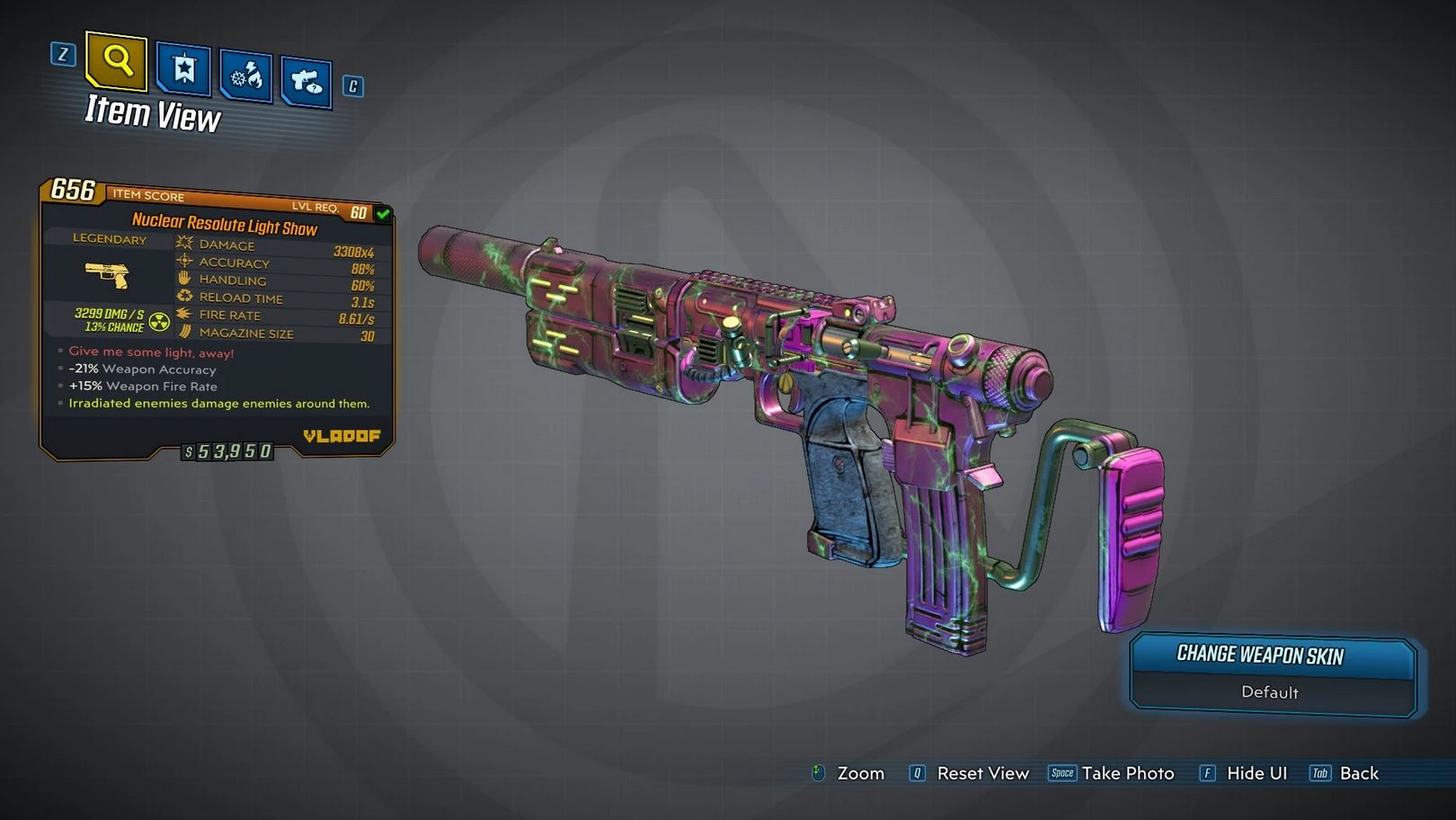 In Borderlands 3, Pistols are some of the most fun ways to play the game. With so many legendary pistols out there, every pistol in Borderlands, has its own unique abilities and features. Some of them being seriously deadly while some being a fan favorite. Today, we are going to go over the top 10 Best Legendary Pistols in Borderlands 3.

The Unkempt Harold is a Torgue legendary pistol. It is a hit or miss from any suitable loot source but has a higher chance of dropping from Caber Dowd located in Bloodsun Canyon on Gehenna. When fired it discharges projectiles in a straight line. The farther these projectiles the more it will spread. So, using this pistol in a close to medium range is recommended to utilize it to its full potential.

Red text – “Defender of the night.”

Gargoyle is a COV manufactured legendary pistol. This is obtainable from any loot source in Bounty of Blood and has an increased chance of dropping from Dickon Goyle in Bloodsun Canyon. It gives out corrosive darts that deal damage upon impact and after impact, the darts explode again, and the explosion deals the same amount of damage as of impact. It can easily take down non-armored enemies.

The damage potential of the Gargoyle is limited by its ammo consumption. It eats up 2 ammo per shot. There is also an x2 variant of this pistol that consumes 3 ammo per shot. It is highly suited as a backup gun to dispose of enemies with high health.

Lucky 7 is a Jakobs manufactured legendary pistol. This is a pistol marked by uncertainty. With each reload it will gain different special effects randomly. It can gain the special effect of firing explosive rounds, elemental rounds, or all critical rounds.

All these special effects can stack providing a chance to get multiple effects at one time, elevating the amount of damage it can deal. To add to it, it has a high magazine size.

It is available from any suitable loot source and has an increased chance of dropping from Scraptrap Prime located in the Compactor.

Maggie is also a Jakobs manufactured legendary pistol. It can be attained from any suitable loot source and drooping from Turnkey Tim located in Floodmoor Basin on Eden-6 is highly probable.

This pistol is capable of firing 6 projectiles per shot but has low accuracy. It is built with fast reload speed, increased magazine size, and is capable of dealing with critical hits. It has a high damage potential. Using it on a medium-range is the best as its pellets can spread. Using it on Fl4k will make every hit from this pistol be a critical hit.

Red text – “I had not thought death had undone so many. “

Hellshock is a Maliwan manufactured legendary pistol and is geared up with a constant incendiary and shock element. The projectile is of the chosen element at first and switches to another element after the first impact. The projectiles are also able to bounce once.

By shooting at the enemy’s feet, you can utilize the bouncing property to switch elements without ceasing fire. To lessen the hold-up while shooting from charging the weapon you are able to continually pump the trigger but with this, you will not be able to sprint.

Prompt Critical is a Torgue legendary pistol. It is attainable from any loot source and has a higher chance of dropping from Evil Lilith located in Castle Crimson. It has soaring damage and is geared with a large splash radius.

Using this weapon in sticky mode, the more you stick to an enemy the greater the damage will be. This pistol proves to be dangerous when Moze has it.

Love Drill is a Jakobs produced legendary pistol. It is attainable from any loot source and chances of dropping from Eleanor located in Heart’s Desire on Xylourgos is highly elevated. This pistol has a special ability to add 2 bullets with each critical hit it deals. It has a reduced magazine size, high damage, and slightly enhanced critical damage.

Love Drill is capable of dealing very high critical damage and can obliterate enemies with its critical damage. With the special ability, there will be no need for reloading. Along with all these the pistol is also backed up by chances of getting double shock damage making it easier to reduce shield.

Hydrafrost is a legendary pistol produced by COV. It is a hit or miss from any loot source but has a higher chance of dropping from Shiverous the Unscathed located in Negul Neshai. Its special effect allows it to fire incendiary projectile for 10 seconds with the second shot after a kill dealing bonus incendiary or shock damage. It has a high fire rate and with the special effect makes it a very effective pistol.

If luck is on your side and each time a suitable additional element is combined it proves to be effective all the time. Although it is not good against bosses if there are no other enemies around to trigger the special effect.

Tizzy is a legendary pistol produced by COV. It can be attained from any suitable loot source. Tizzy is geared with the highest damage per second in the game and has an extremely high fire rate. Its special effect is capable of increasing its firing rate and magazine size.

Upon reaching the 6th bullet, the bullet will ricochet and will go astray in the air and each 12th shot is amped and is capable of dealing +70% damage. As you go on firing it gradually increases its firing rate and stops when the maximum fire rate is reached.

As it swamps the enemy with its fire rate the ammo decreases quickly too. So, a Cutpurse artifact is necessary with it. Switching to Extreme Hangin’ Chadd combined with any ammo regeneration is also a good choice. Combining Tizzy with St4ckbot class mod, the Guerillas in the Mist skill, and The Pearl of Ineffable Knowledge artifact FL4k can reach massive damage outputs and can incinerate enemies quickly.

Lightshow is a Vladof produced legendary pistol. It is obtainable from any suitable loot source and has an elevated chance of dropping from Lasodactyl in the Obsidian Forest. Its special effect allows it to fire 4 projectiles in a cross shape that goes forward in a spinning circular pattern.

It has an extremely high damage output and is capable of deleting the enemy without any extra effort. It proves to be effective when used in close range to get the hit of all 4 projectiles and if in longer ranges use it against large enemies.