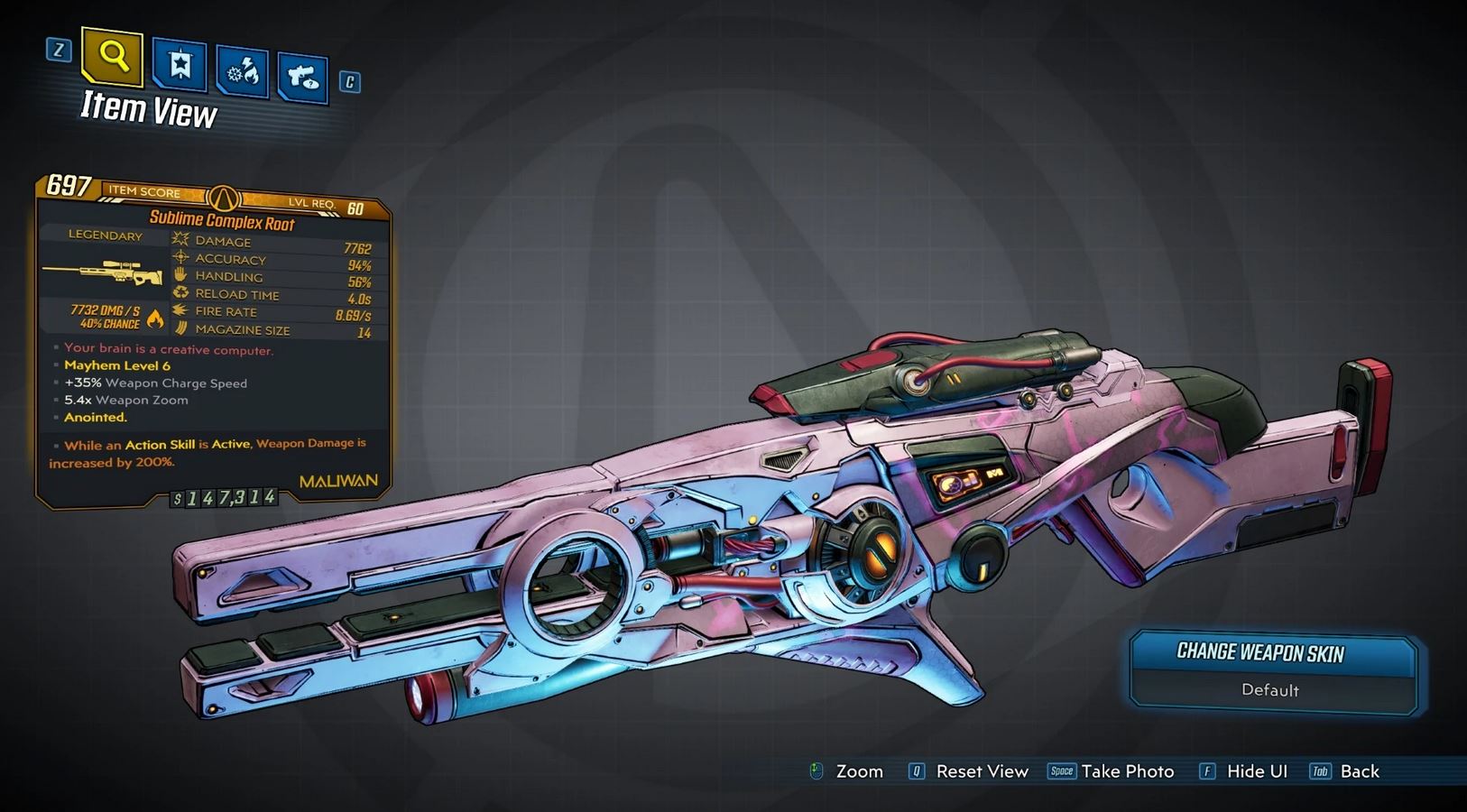 Sniper Rifles in Borderlands 3 are some of the most important weapons you can consider keeping at your armory. They come with high damage output and are great for nuking heavy bosses that are hard to kill with other weapons. There is no doubt, you will need atleast one best Legendary Sniper Rifle just in case if the boss is too strong.

Below are the Top 10 Best Legendary Sniper Rifle’s in Borderlands 3:

If the critical hit takes down an enemy while scoped in the character will be unnoticeable to the nearby enemies.

It is also geared up with increased base damage. The Unseen Threat can be attained in the Guns, Love, and Tentacles DLC and can also drop from Amach located in Cursehaven on Xylourgas.

Lyuda is a Vladof legendary sniper rifle. Upon firing it shoots out 3 projectiles and these projectiles split after proceeding for a short while and this sniper is best when used for medium-range or against large opponents as the probability of all the projectiles dealing a blow is high.

It has a high fire rate and multiple bullets per round. The Lyuda is attainable from any loot source and is a reward for finishing all of Zero’s Target of Opportunity missions. There is also a higher chance of dropping from Tremendous Rex.

The Skullmasher is a Jakobs legendary sniper rifle. It has the special effect of shooting five projectiles by just consuming one ammo per shot. It is geared up with increased critical damage but has a diminished accuracy.

The full potential of damage will be seen if all the projectiles are able to hit the enemy. Though the limited ammo of sniper rifles may be a hindrance to its damage potential. Its fire rate is also not that bad.

So, using it at mid-range and versus large opponents is the best option as for longer ranges the projectiles may spread. Any kind of boss from Guns, Love, and Tentacles DLC can drop the Skullmasher but dropping from Eista located in Skittermaw Basin on Xylourgos has a higher probability.

The Monocle is a Jakobs legendary sniper rifle. The special effect of this sniper gives it x3.5 critical damage while aiming down sights and has an elevated accuracy, handling, weapon zoom, and reload speed. Although its base damage is reduced.

The Monocle is best when used for long-range targets. With the increased critical damage the enemies can be eliminated with much effort. The chances of obtaining this sniper from Demoskaggen located in The Droughts on Pandora have higher chances.

The Boogeyman is a Vladof legendary sniper. This sniper shoots lasers and these lasers deal splash damage. With a greatly increased fire rate, handling and accuracy this is a pretty good weapon. Upon a kill, it has chances of spawning a boogeyman, which is a pink skull exploding upon contact with enemies and deals non-elemental grenade damage.

After the explosion, there is a 100 percent chance of spawning a new boogeyman. It also has a 60% chance of not consuming ammo in its arsenal. It is one of the few snipers that have a splash damage type that doesn’t need to rely on a restrictive gimmick. The skulls will create a chain of explosions.

It is very effective against bosses. This gun works very well with ammo regeneration skills such as Moze’s skills in her Bottomless Mags skill tree or the Bloody Harvest exclusive Terror Anointment.

Red Text – “That happens all the time.”

The Headsplosion is a Jakobs legendary sniper rifle. This sniper is able to shoot explosive rounds with splash damage and if critical hits occur 3 bullets will ricochet to nearby enemies. The splash damage and the ricochet of bullets allow this weapon to deal high damage and crowd control probabilities.

The Headsplosion is attainable from any loot source and its chances of dropping from King Bobo located in Voracious Canopy on Eden-6 is highly elevated.

The Krakatoa is a Maliwan legendary sniper rifle. It is always geared up with fire elements. Upon killing an enemy with this sniper there spawns a volcano that will spit out fireballs and it deals damage.

The volcano is useful against a group of enemies. It has increased damage and is able to kill most regular enemies with just a single critical hit. For a sniper, it has a very high fire rate and by using it in full auto you will be able to see its full damage potential.

To be able to become an expert on this weapon one should be able to use its charging mechanism properly. It becomes very difficult as you use it at a longer range. With Moze’s Forge keystone the ammo shortage of this sniper can be avoided allowing it to be used as a fully automatic assault rifle.

It has a higher chance of dropping from Tumorhead located in Lectra City on Promethea and is also a hit or miss from any loot source.

The Storm is a Maliwan manufactured legendary sniper rifle. It deals shock damage and spawns a projectile in charge-up single fire mode and consumes 2 ammo per shot. After it impacts it generates 4 shock orbs and these orbs electrocute anything that is within its range. It has increased damage over time.

The Storm is able to constantly electrocute enemies and eliminate them with its high damage unless the enemy evades the projectiles in time. Amara with her elemental damage gives emphasis to shock that can bring out the highest potential of Storm. It can be attained from any loot source but dropping from Katagawa Jr located in Atlas HQ on Promethea is highly probable.

Red Text – “Your brain is a creative computer.”

The Complex Root is an absolute beast and is a Maliwan sniper rifle. The special effect of this sniper allows it to shoot two projectiles following a charge of one second. One of the projectiles will advance for about half of the maximum range of the weapon and the other projectile will proceed till the maximum range.

The Sand hawk is a Dahl manufactured legendary sniper rifle. As to its name the shots that it fires 7 projectiles that take the shape of a bird and move forward in a way similar to the way that a bird flaps its wings.

With each shot fired it consumes 3 ammo. Sand Hawk has three firing modes Full Auto, Semi-Auto, and Burst Fire. The Full Auto and Semi-Auto are probably the best firing modes. In short-range its burst damage is really good and in the long range, its hitbox size is increased. But in long-range this sniper is not effective or simply worthless as the projectiles have a limited distance that it can travel and if that is crossed it simply disappears. This sniper can be attained from Katagawa Jr at Mayhem 6 and above.