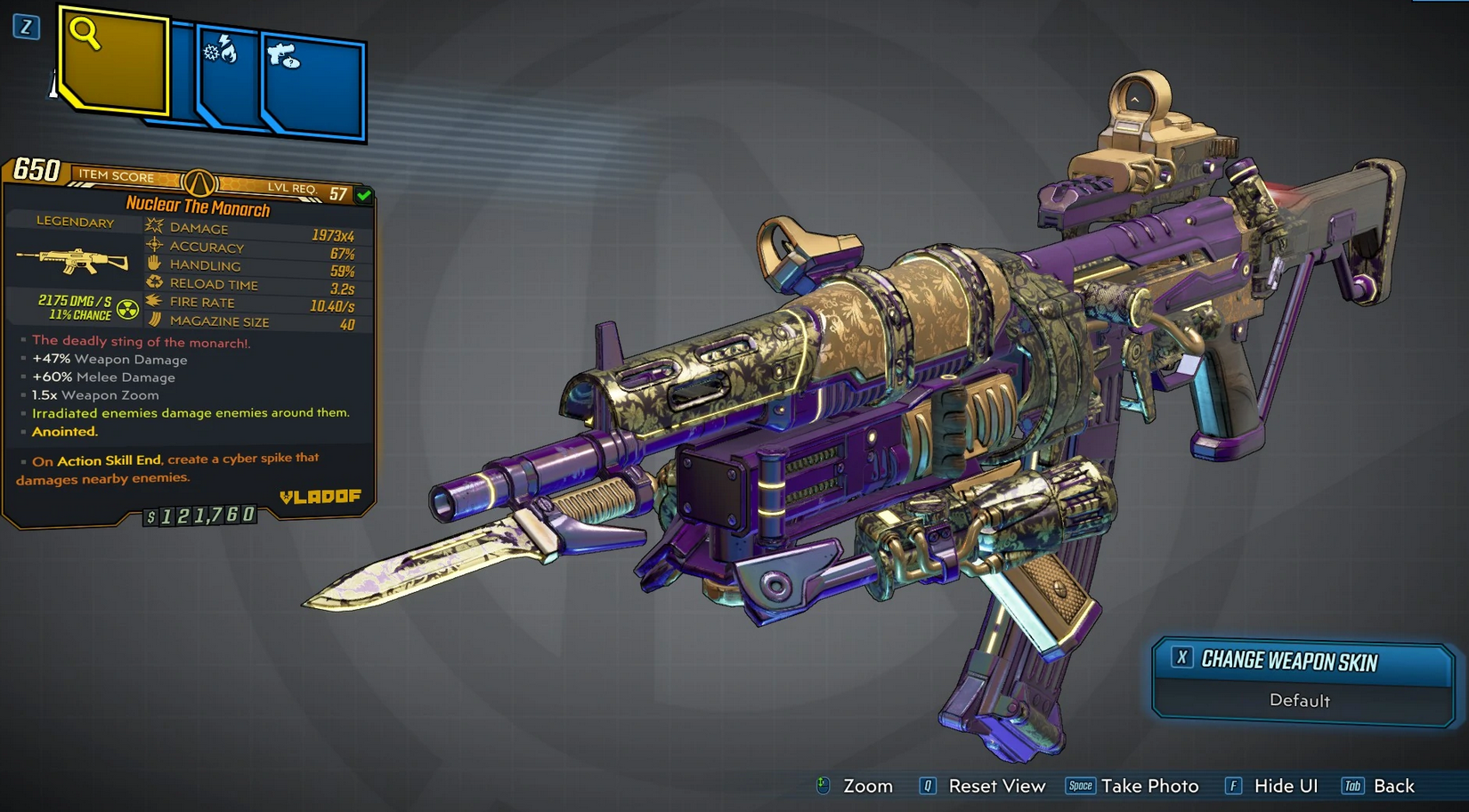 Borderlands 3 is a game full of twists and turns, with its assault rifles being the best highlight. Let’s see some of the top legendary assault rifles.

Drop Location : Titan located in The Slaughter Shaft in Pandora.

It is an extremely rapid firing weapon that can come in any element, including radiation, and has an increased chance of dropping from Titan – the final boss of the slaughter shaft. The Shredifier is the single fastest firing weapon in the entire game, matched only by the tizzy at full speed. It comes with the mammoth 100 plus magazine and fires at over 16 rounds a second. Its bullet per damage ratio isn’t the highest around, but the finger slip on the trigger is easily enough to blitz an enemy. It also comes with an under-barrel attachment to provide an alternative to the firing method like a grenade launcher, but you can also get a twin barrel.

Sawbar is an incendiary only COV weapon that has an increased chance to drop from Borman Nates so you can fight around the meridian outskirts. It is a spectacular gun both in the damage deals but in particular with its effect. That effect is maintained from its pearlescent variant in borderlands, where each bullet bursts apart to create a fiery explosion after traveling a certain distance. The sheer size and the force of each blast are enough to decimate enemies, and due to the area, it covers you don’t even need the line of sight for them to just melt away. However, the distance you need to activate it is massive.

Drop Location: Anointed Alpha located in The Anvil on Eden-6.

Ogre is a non-elemental weapon that drops the fastest from anointed alpha as part of the Melvin practice quest, and you can find them around here in the anvil. The Ogre fires a barrage of explosive projectiles at a solid clip, although a barrel will spin for the first few rounds before rotating at full speed. The projectiles don’t travel lightning fast and not very accurate, but that would not stop you from landing shots. It does come in the times two variant, which is perfect for MO’s, and that is where this gun shines the brightest.

Drop Location: Anointed X-4 located in The Anvil on Eden-6.

It is a unique weapon that has an increased chance to drop from anointed x4. It fires bike shot rounds at a steady pace with moderate recoil. A boom sickle definitely is taking a standard shot and charging it with TNT. The boom sickle deals splash damage allowing it to be enhanced by modes. Its pallets are fired in the shape of a sickle and are concentrated best while aiming, but they really aren’t any need when even wayward shots blow your targets.

It is an elemental weapon that cannot come radioactive and is chaotic, firing quick-fire rounds that result in a widespread explosion on each kill. The blast is easily large enough to envelop multiple enemies but will only be triggered if the bullet from the enemies was the thing that killed them. That means the blast don’t come often as you would think, but when they do, you will definitely notice they are also elemental attuned to the guns element, and if you are after the best one for triggering its effect, it would have to be cryo to the lack of damage over time it causes. It is a great gun for every single vault hunter that will often reward with the crack of a supernova.

6. Breath of the Dying

It is a gun with great effect that becomes corrosive – it is an incredible assault rifle that doesn’t let its single element define it. Instead, it enhances it every time you get a kill to a radial burst of corrosive orbs that will sweep outwards from your target. It will annihilate any enemies in the vicinity. The chaos effect will only activate if the gun is charged, but its bullet damage is fantastic as well – it will rip through the toughest mobs in the game with ease.

Red text: “The stars are better off without us.”

It is a multiplexed assault rifle that can come in every element except corrosive and fire. It can be obtained the fastest by targeting the gogo troopers where you fight in Atlas HQ. The star helix is like a toned-down monarch firing fewer pallets slower, but each one dealing greater damage, but it only comes with 24 bullets in the mag. It encourages you to be close to your target.

Red text: “A broken smile beneath her whispered wings.”

It most often comes in a semi-automatic form, but it does come in a fully automatic or massive variance as well. It combines the traits of various torque weapons when you land a critical hit. Landing them will stick bombs to your target, which explode after a period of time, dealing an extreme amount of damage and ricocheting bullets to nearby enemies. If you land multiple consecutively, the grenades will explode at once, dealing monster damage, and it’s incredibly capable against bosses as well as mobs.

It is crafted with purple steel and can be only dropped from either tom or zam – who you fight here in heart’s desire as part of DLC2. It fires at a decent pace dealing great damage but where it truly comes to form is through the summoning of souls. The souls of the dead fly periodically from the barrel in the form of purple skulls and get thrown on whoever you are shooting at.

Drop Location: Killavolt at Mayhem 6 and above.

Red text: “The deadly sting of the monarch!”

The six-plus weapon drops fastest from kilovolt – you fight in Electricity – it is a mastermind of dishing out. It comes in times four or times eight variant kill by mobbing and four giving you best value on that front – you’d think this gun was powerful without even knowing what its bipod attachment does, and that’s double the damage.

These were some of the top assault rifles from the game we hope you liked.