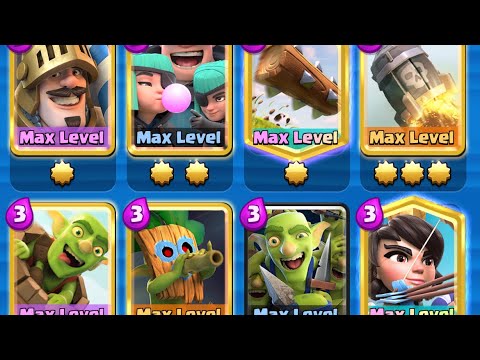 Log bait is a strategic deck in Clash Royale. Its sole aim being the baiting out of a low damage spell, like Log, so chip damage can be dealt to tower by a high damage, low hit-point troop in the absence of a spell. This deck takes the game pace under control by making the enemy use their spells for a useless cause.

If you want to master a Log Bait Deck, you got the very thing in its name “Bait”. By using this deck against heavier decks, it’ll be a bed of roses for you to out cycle the opponent. You should aim to bait out your opponent’s counters (spells like logs). For defense you can use units that have high hit-points. Spell cycle is necessary while playing a bait deck.

Acquiring chip damage all over the round is really important. The safest possible way to play is to get a princess connection or cycling logs until their tower is in rocket range. It’s also necessary to calculate the damage dealt by rocket and log when combined together as there is high probability of losing due to miscalculation.

Another misinterpretation that players make is to play bait deck too aggressively, you need to try to control the tempo of the match whilst being aware of your elixir that is needed to counter the enemy’s push.

Princess is the card with the most value for Log Bait. She is very vital in defense, can defend efficiently with her long range, can play her opposite lane and is perfect for baiting.

Goblin Barrel is your ticket to victory, using this card every time you’ve successfully baited a spell or key counter will push you towards victory.

It is really useful in this deck as it protects your princess and towers efficiently. Pairing this card with ice spirit is a good counter against certain charged units like battle ram or ram hider.

Knight is also a useful unit. It can tank and be used to counter push.

Ice spirit is really useful when used with inferno for defending. It cannot be replaced by any other card.

Rocket proves to be useful to take down low hp towers after dealing enough chip damage.

Mostly you can use this for defending. It can be replaced by Zap.

Goblin gang is very useful as it is Zap resistant. At the same cost it is easier to level up than skeleton army.

As the match starts, at the very first moments, its normally better for you if you wait for the elixir bar to get full. There’s a lot of options after that. If you have either Goblin Barrel or Princess you can use either one for chip damage and see how they respond.

If you have both then using barrel is better. You can also play Goblin Barrel in the safe spot to take a chance whether you can bait a spell or you can cycle ice spirit or knight in the back. If they fall for the bait and use a spell punishing it isn’t a good choice as it is the start of the match and you don’t know their early game plan.

You wouldn’t want to end up in a situation of low elixir when the tower is vulnerable. Let the enemy use their offense strategy and execute it and it will be easy for you to counter or defend it with less spells in their hand. Always play the Princess in the back and protect it as it’s splash damage will help a lot and protect it. Spacing your troops will be best for you.

The opponent will be forced to do something if you have a counter push. If they have cycled to a log, let them use log, in that situation you should use Barrel for chip. If they haven’t cycled to a log, they deploy a troop don’t use the Barrel. That’ll save your barrel and you will have a positive elixir trade as well.

You can start stacking princesses in the back after double elixir hits, to start to gain control of the battlefield. Wait for the opponent to play few cards, so princesses won’t get distracted and move around too much, and you can utilize the princesses to their fullest.

There are four placements where you can place the princess.

You can deploy the princess in the back corner of the side from which the opponent is attacking. It makes it a bit easier to protect, and it’s really useful. The second placement is in the tile right in front of the King’s Tower.

It serves the purpose of a log bait and is also useful in dealing with smaller pushes comprising of weaker cards. Third, you can place it behind the King’s Tower, effective against graveyard. Fourth is at the opposite lane from where the enemy is pushing and close to the tower. It can prove useful against pushes when the whole push is pulled towards the center. It also acts as log bait. Its timing can be tricky though.

You can use the Knight to defend the enemy push and if after defending a portion of health remains of the Knight you can counter attack with it. Infernos can be placed to protect the princess.

Keep on defending and cycle back to another princess. If the princess cycles correctly they will be forced to use spells and a perfect time to start being aggressive, and spam barrels. As they use spells, you need to use barrels simultaneously.

When triple elixir hits, it’s time for rocket cycle. If the opponents Tower has less health, stop with the barrels and start your rockets for a prompt end of the match.

Your match can go on for quite some time as you only require to gain chip damage throughout the match and you’re gradually working towards getting their tower into rocket range. You shall not overshadow defense while focusing on the primary objectives and your defense will be automatically good if you keep placing your units at the right place at the right time.

Clash Royale: How to Play Princess?