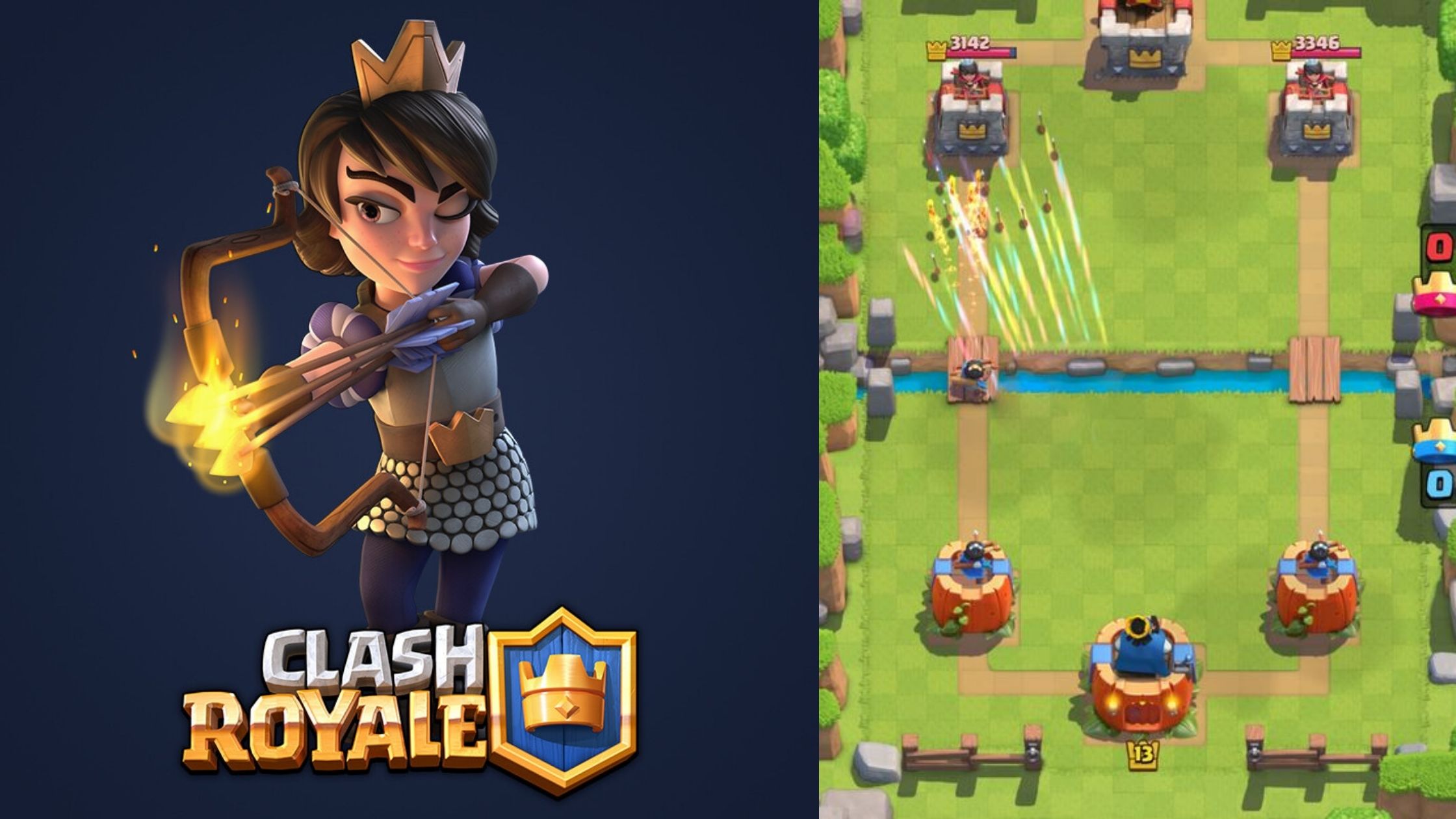 Princess, obtained or unlocked from Arena 7, has the longest range of any card in Clash Royale. It’s range even exceeds that of the towers. It can deal damage to towers from the bridge without coming within the range of the towers. It can be used for both offense and defence. But as universe has it everything has a flaw and the flaw of this card is its small life or low hit-points. In fact, it can be taken out by a single shot by arrows, spirits of fire and log. There are measures to counter these spells by summoning a hoard of skeletons or goblin gang. Hiding the Princess behind the tower and any point far away from the battles so she can deal damage without interruptions. Deploying two princesses at the same spot is a bad idea. The aim of using princess is to disrupt the enemy’s summoning order.

How to Use Princess?

Princess is an extremely useful legendary card. She is the best for baiting spells, for offense and as well as defence. She is the card which when deployed that pressurizes the opponent. The opponent can’t just leave a Princess charging towards the towers. The opponent will be forced to use a card that they were saving for another situation, a negative elixir-trade can be forced, Log can be baited, while Princess does the chip damage with her wide range of 9 tiles. As it only costs 3 elixirs, cheap enough to cycle over and over. Making her one of the best cards.

Before using the Princess one should know the placements. Here I’ve listed some useful placements for her:

Now, there are more criteria to these placements. There are two things on placing the Princess left and right; Same-Lane or Opposite-Lane. The bridge spam placement falls on Dual-Lane pressure.

‘Same-lane’ Princess placement is quite simple. It’s when you deploy the Princess at the King’s Tower. If you want your queen to go towards left place it a tile left from the King’s

Tower and if towards right vice versa. This way the Princess creates a constant “Area of Denial” over your push. However, in this way, the queen will be vulnerable to Logs if it is used in your push. This placement is not suggested for defence as your Princess is vulnerable to spells.

An ‘Opposite Lane’ placement is very convenient and useful for you. It is when you deploy your Princess at the front or back of the King’s Tower. By placing her to a tile left or right to which ever direction you want her to go but in this case you need to place her at the opposite lane of which your push is going. This works both as offense and defence as it keeps her out of the line of fire. She can’t give you much support, but she useful as she can take out opponents Princess defending your push at the opposite side. She can also provide splash support, and by the time she finishes her walk towards the bridge, not only will you have cycled to a new Princess but the opponent is forced to make a response. The opponent will be left with less elixir to counter your push. This is known as “Dual Lane Pressure” and ill be explaining this next.

Dual lane pressure is Bridge Spam. You set a push from one direction and place the Princess right at the opposite lane at the Bridge. Your opponent gets forced to use Elixir on the Princess and have less elixir to defend the towers from your push. Whatever might be the amount of the lessened elixir it is crucial and makes a difference upon who will be the victor. This placement of the Princess even does some chip damage thereby making it easier for your victory.

While using “Dual Lane Pressure”, you are advised to place the Princess immediately in front of the Bridge without dwelling on it too much. This way she will hook the tower and, if it goes right, reduce some hit-points of it before going down. Many players use it in a defensive method by placing the Princess in the bridge after deploying attacking cards like tamer or giant, cards that aim straight towards the towers. In this way the Princess can provide defence from both air and ground troops. But this depends upon the situation. Taking into account the enormous range and splash damage of the Princess, you can take advantage of it and place it on the opposite side, allowing it to deal damage to a mass from a safe spot.

The cards in this deck are as follows:

For offense you have PEKKA, Prince and Dark Prince. It is not necessary that you need to have three cards on hand, just having Dark Prince and PEKKA is good. But if it’s the contrary, so long as you have arrows in your hands, going PEKKA and Prince is not a good idea because you will lack AOE. Princess fulfils the role of AOE. Reel her in by deploying her a few tiles away from PEKKA push, for PEKKA can guard her from the log. Deploying her in the other side is also recommended for the enemy will be forced to use swarm or log on the other side. Dark Prince and Princess is enough for AOE. Freeze is also there, as an element of surprise and lead to 3 crowns. As this deck depends on the surprise factor to take down towers, shall only be used if necessity arises.

In case of defence, Ice Wizard slows down troops and also deals AOE damage. Arrows and Princess clear swarms. For the tanks, PEKKA and Princes are there to take care of them.

This Deck is mostly for the purpose of baiting out spells. The Goblin gang, Goblin Barrel and

Princess. Log can be baited out by deploying Princess with Goblin Gang on one lane and Goblin Barrel, and Ice Spirit on the other. Princess can be used for chip damage because she gets instant damage, she is useful in defence and is compatible with Goblin Barrel. Her splash damage can help protect the barrel from swarms, so logs don’t get wasted.

This deck’s defence is better than offense. Goblin Gang plays the role of distraction. Inferno tower serves that purpose too. To take out tanks Knight and Ice Spirit works well together. Princess the trump card of this deck, forces out spells on both offense and defence, and serves as both offensive and defensive. Rocket should be used only when needed for heavy and hard pushes from enemy.

The cards in this deck include:

The important cards in this deck are Hog Rider and Miner. They are the winning conditions in the Deck. You can use either one of them as you starting hand and make sure that you deploy them and throw them towards the tower.

Princess, Ice Wizards can be paired with either Hog or Miner. It is wise to push only after defending with Ice Wizard as he is the only defence you got.

Barbarians are only to be used as a defence against tanks, glass cannons and mini-tanks. Skeletons are the secondary tank killers. Since both tank killers come in swarms, and defenceless against spells and AOE, using them right next to each other is stupidity.