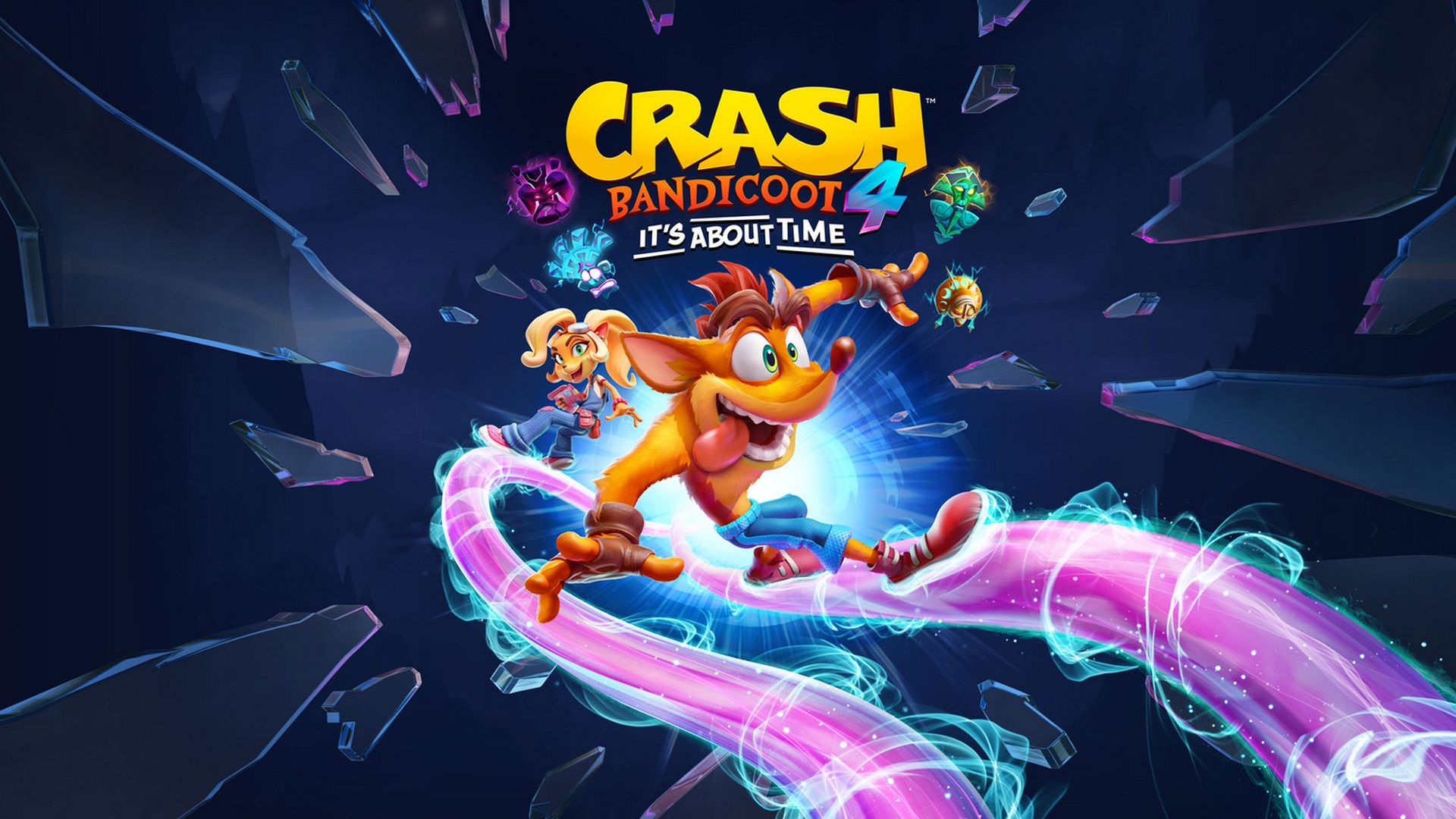 One of our favorite childhood heroes is finally back: Crash Bandicoot. The fourth episode – It’s About Time and, indeed, it was really about time – was released on October 2 on PS4 and Xbox One. It was developed by the Toys for Bob studio (Spyro or Skylanders) and published by Activision.

The marsupial created by Naughty Dog in 1996 is still in the memory of many players. The platform game has seen two sequels signed by Naughty Dog, but also many spin-off and spin-off games developed by other houses. There are more than a dozen titles honoring Crash, including platform games, but also racing, action-adventure and even a party game. It was still necessary to wait twenty-two years before obtaining a faithful sequel to the third opus.

The followers will recognize without hesitation this dialogue resulting from the credits of the famous cartoon, Minus and Cortex, published for the first time in 1995. These words are perfectly adapted to the Crash Bandicoot license, since Doctor Neo Cortex, big villain, has the same goal that these two mouse guinea pigs. After escaping from the interdimensional prison in which he was held at the end of the third opus, Doctor Neo Cortex decides to wreak havoc and conquer the different dimensions. Crash must then stop it.

Is it still necessary to present Crash? Originally from the Wumpa Islands and a lover of yoyoing, he is silent, full of humor and greatly appreciates Wumpa fruits. Like his friends, he has not aged a bit. Crash is once again accompanied by the voodoo mask, Aku Aku, as well as his sister, Coco Bandicoot. But this fourth opus also signs the return of Tawna, his girlfriend who appeared only in the first title. Its design considered too sexy for the young public, it had been forgotten by the developers, until today. On the side of the allies, we also find Polar, the little polar bear as well as four new quantum masks which each bring a specific power.

Crash Bandicoot would not exist without its enemies including in particular its creator, Neo Cortex, the mad scientist. In his evil quest, he is helped by his old friend, Doctor Nefarious Tropy as well as Uka Uka, Aku Aku’s evil twin. We also rediscover Dingodile, creation and henchman of Cortex, Doctor N. Gin, fourth boss of the second and third opus or even Doctor Nitrus Brio who changes sides like jacket.

On the side of the allies, like that of the enemies, many other characters make a cameo in this new title full of promise.

Now that the plot is laid and the characters are remembered, let’s talk about the gameplay. This fourth opus is extremely faithful to its predecessors and always so funny. Crash still has the same features and wants to be both comfortable on the ground, with his ability to whirl, and in the air, with his agility to jump from one obstacle to another. The game offers us the same styles of 2D and 3D levels, nervous races with the camera placed in front of the hero, fights with bosses or even hidden levels. We therefore find all that made the success of the series, but also its few flaws such as the problems of perspectives that easily make us lose lives. Although a hint has been added to show us where our character will land after a jump,

As always, the difficulty is there and the lives lost are numerous. This is what has always made the beauty of Crash Bandicoot and this fourth opus is no exception to the rule; it might even be a cut above. It is then necessary to start over several, even many times certain passages before memorizing the path and its pitfalls.

As for its predecessors, in Crash Bandicoot 4 it is possible for us to simply pass the levels without worrying about the various trophies to accumulate. It therefore takes a good fifteen hours to complete the game. The fans will obviously try to platinum the title, which, ipso facto, will greatly lengthen its life. In each level, you have to collect a certain number of apples, destroy all the crates, die a maximum of three times and find the hidden gem. Of course, each level will have to be replayed in chrono mode which forces us to reach the finish in a given time. In other words, to be able to meet all these conditions, you have to be patient … a lot of patience.

This fourth opus, although extremely faithful to the others, brings several novelties which are nice without really being transcendent.

First of all, from the start of the game, two options are available: the retro mode which forces us to restart the level from the beginning when we have exhausted all our lives and the modern mode which allows us to start again automatically at the last point of passage. .

While usually only two characters are playable, the hero and his sister, this title allows us to play as five characters: Crash, Coco, Tawna, Cortex and Dingodile.

There are separate levels called “Flashback” which can be unlocked by collecting scattered cassettes throughout the base game. These are 2D routes in which we have to jump from one box to another, without forgetting any in the process and without falling into the void.

Another mode, “N.Versé” allows us to replay each level, but these are reversed, like a mirror, and they take place in the dark.

This title has both competitive and cooperative modes. Indeed, “Pass N. Play” allows two to four players to play locally in order to progress as a group through the campaign. At each death, checkpoint, or both, the player must turn the controller. Nothing innovative, it’s even a boat in the sense that it is not necessary for a message to appear on the screen to pass the joystick to your neighbor.

On the other hand, an interesting point: the possibility to face his friends locally up to four players also during races (races which take place in the different levels of the campaign). With the first, “Checkpoint Race”, you have to finish the level faster than your colleagues. The second, “Crate Combo” asks to destroy a maximum of crates.

I saved the best for last: the graphics. This is arguably one of the most spectacular points of the game. The series has always been attractive. Even the first opus was a pleasure to see, given the capabilities of the time. Advances in technology have allowed developers to create an undoubtedly sublime title, using Unreal Engine 4. As colorful as ever, Crash Bandicoot 4 is clean, crisp and extremely visually pleasing. From the different environments crossed composed of a multitude of details to the animations of the characters, the title turns out to be simply graphically perfect.

Note in passing that the story made up of different dimensions allows you to have fun on more than varied terrain. Between the forest, the marshes or the city and the desert, the diversity of biomes is particularly pleasant and brings us back to the best memories we have of the Crash Bandicoot series.

Honestly, it is difficult to find black dots in Crash Bandicoot 4, as the realization is faithful and finely worked. The story, the characters, the biomes, the humor or even the difficulty can only make us travel in the past. It’s like a smell or a taste long forgotten and which we suddenly rediscover, but which is even better than in our memories.

Of course, some flaws are to be noted. Like the lack of precision in terms of perspectives. This is not a major flaw, however, and we quickly go over this detail which, in the end, added and always adds difficulty. However, one can regret that the game does not take us on the backs of animals for furious races as in the third opus. Finally, although the mode “Pass. N. Play” is, in one’s opinion, perfectly useless, one  cannot hold it against the developers who have tried to bring new things. But Crash Bandicoot doesn’t need any frills, since it’s largely self-sufficient.

Apart from these few points, Crash Bandicoot 4 is and will remain forever etched in the memory. We therefore give it a score of 9/10. The pleasure is immense and the desire to turn the game on speaks volumes about its quality. Hopefully, we don’t have to wait that long before enjoying the pleasure offered by this crazy marsupial!