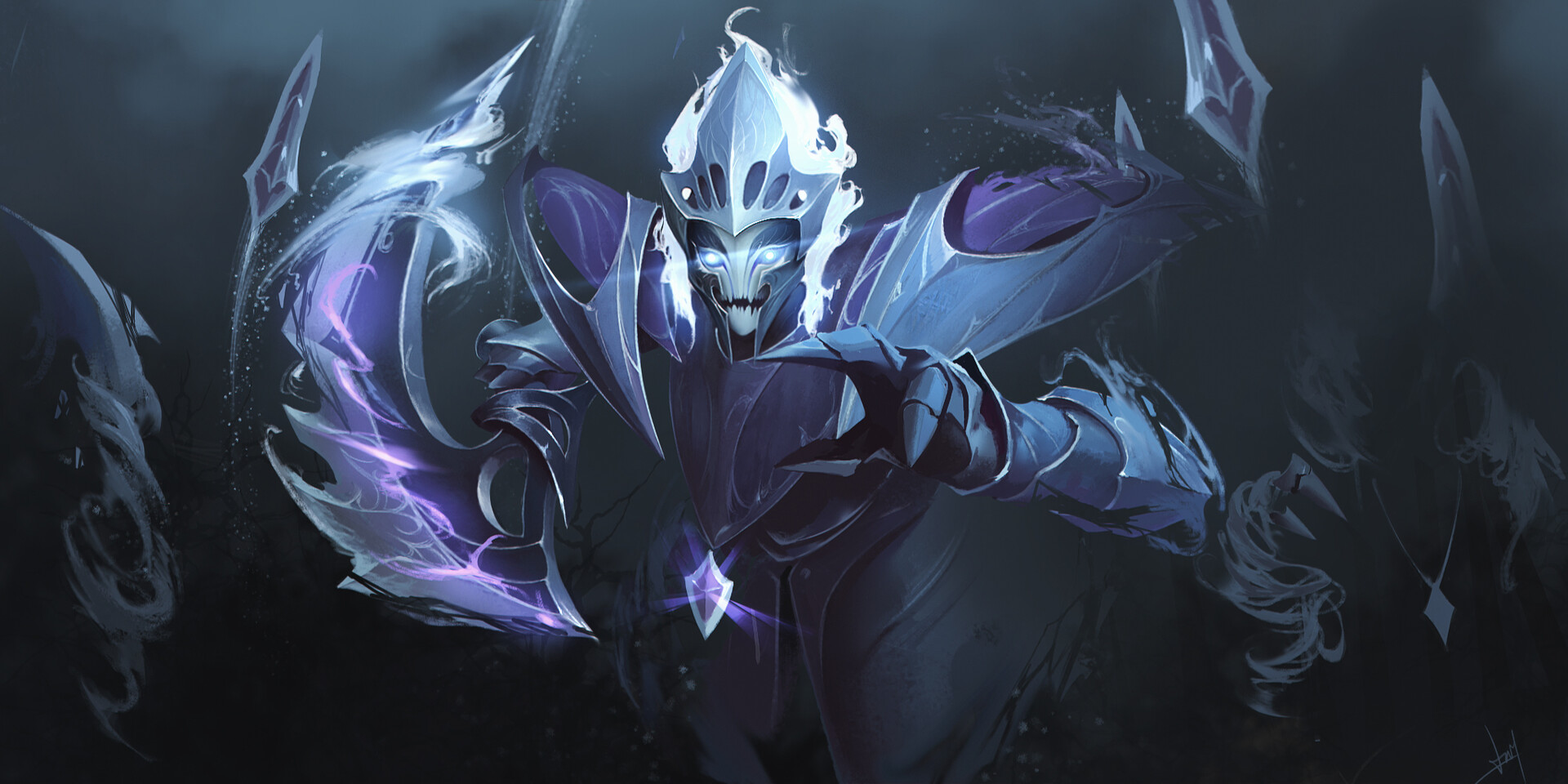 When it comes to hard carries in DOTA 2 Spectre is probably one of the most distinctive hard carries. The Spectre being an agility carry hero outshines about every other hero on the late stages of the game.

She can even utilize her defence as an offensive ability. Although from early to mid she is really squishy and the primary motive is to farm only. She is very weak and vulnerable in the early game and while escaping from ganks drains her mana almost empty.

The Spectral Dagger ability allows the Spectre to hurl a dagger towards the enemy meanwhile providing herself with mobility as the ability when used generates a Shadow Path.

This ability reduces the movement speed and deals damage to all the enemies that are along the trail.

The enemies that are hit by the dagger also generate a Shadow Path as they move therefore making it a lot easier for the Spectre to chase down enemies.

The Shadow path lasts for 12 seconds. As the Spectre moves along this Shadow Path terrains like trees and elevation cannot interfere the Spectre’s path, she will simply move through these obstructions. This can even elevate your farming as it can help you get to creep camps faster and without interruptions. Upgrading this skill first is essential as this skill will be a great deal of help while escaping ganks in the early game.

Though you have to keep in mind its mana cost as it can consume about half of your total mana when used in the early game. In fights use this skill on the ground rather than aiming at an enemy this skill will be able to hit more enemies and the damage dealt is also spread.

Towards the end of teamfights use this ability on the enemies that are escaping to catch up to them and enemies that are leaving Shadow Path are revealed even if they blink or conceal themselves. The targets that have spell immune are not affected by the slow effect but they will generate a Shadow Path as they move.

So, if you come across a lone enemy hero in a jungle use Desolate and start attacking without hesitation. This skill also helps in predicting ganks as when you use it on a lone enemy creep and if the bonus damage is not dealt that means invisible enemies are nearby. Desolate also helps with farming.

You can use it most efficiently by targeting the weakest creep first in a camp then go for the stronger ones. Wards and buildings are immune to this skill.

With this skill a chunk of damage that is made towards the Spectre is reflected to the enemy in a maximum radius of 700 units.

This skill will take on the incoming damage and then reflect the damage, dealing damage to all the enemy units within the range of this skill. Although the damage that the reflect deals is HP removal.

The closer the enemies are to Spectre the more they will be damaged by the reflections. The more HP you have the more damage it deals. Dispersion will reduce about 20% of damage dealt to the Spectre at the ability’s max level.

This skill is can work properly when collaborated with both raw HP as well as damage reduction like armor and damage block.

You can also buy the Aghanim’s Shard to elevate its effects. With the shard around every 300 damage that us absorbed Spectral Dagger is triggered.

Upon using Haunt ability Spectre will produce illusions. These illusions will torment each enemy hero and they are of free will.

With talents it is possible to increase the amount of damage the illusions deal though the damage dealt by the illusions are less than that of Spectre.

The range of this skill is unlimited and the amount of time the illusions last depends on the ability’s level.

The illusions even spawn on concealed enemies but won’t be able to attack them.

During teamfights use Haunt to get the number advantage and to eliminate the enemy heroes that are escaping. With reality you can blink to any selected Haunt illusion. You can use this to escape from ganks or to join teamfights. This is also helpful if you buyback.

For this ability to unlock Aghanim’s Scepter is required. The cast range is this ability is unlimited similar to Haunt.

Shadow Step can take down low health supports and the heroes that rely on range have a hard time against it.

Dota 2 How to play Spectre?

For Spectre the primary aim for this stage needs to be farming. Try to farm as much as you can with Spectre. If possible, try to kill all the creeps in your lane and gather gold to buy items that will ensure victory for you. You also have to remain extremely cautious as Spectre is very vulnerable in the early game.

Be watchful of the map and avoid enemy nukes and harassment. Keep enemies at arms length as a melee hero and only move forward to last hit the creeps. Help out your teammate to gank in your lane by using Spectral Dagger. Get Radiance as fast as you can.

As the game proceeds towards the mid game you will become the primary target of the enemies as they fear Spectre’s potential in late game. They will constantly try to ambush and kill you obstructing your farm and preventing you from getting your items. Remain aware of the enemy movements through the map.

If the enemy is missing remain under the tower to protect yourself. Help in teamfights with Haunt and teleport yourself in the teamfight if you think you can secure some kills for yourself and come out without dying.

As soon as the game reaches the late period it is the time Spectre shows it full potential. By late game it is a given that you will have your core items and you will be able to carry the game.

In every teamfight use Haunt to deal damage to each and every enemy hero. After wards just barge into the teamfight and attack each enemy hero one by one. Just be aware of who you are right clicking.

In the late game you will have a significant amount of HP and you will be able to deal a lot of damage with Dispersion. Even if the enemy manages to kill you a whole chunk of their HP will be gone.

BOOTS OF SPEED: For movement speed.

PHASE BOOTS: Grants some attack damage and movement speed. The Phase skills allows you to move through units.

MANTA STYLE: Allows the Spectre to generate more clones and these clones also benefit from Radiance. The clones will help in farming as well as split pushing.

HEART OF TARRASQUE: This item grants her a huge amount of health and makes her almost immortal with the health regeneration it grants. This item works well with Dispersion ability and deal a huge damage in teamfights.

BUTTERFLY: This item gives Spectre more damage, immense agility stats and evasion as well. Therefore, increasing the damage of Spectre and the illusions as well as increasing the survivability of Spectre.

DIFFUSAL BLADE: Grants some mana and agility. It also slows the target and increases the damage of the illusions.

MASK OF MADNESS: Helps with farming.

VANGUARD: It grants an enormous damage block that is calculated after Dispersion. It also gives HP and HP regeneration that proves to necessary in the early game.