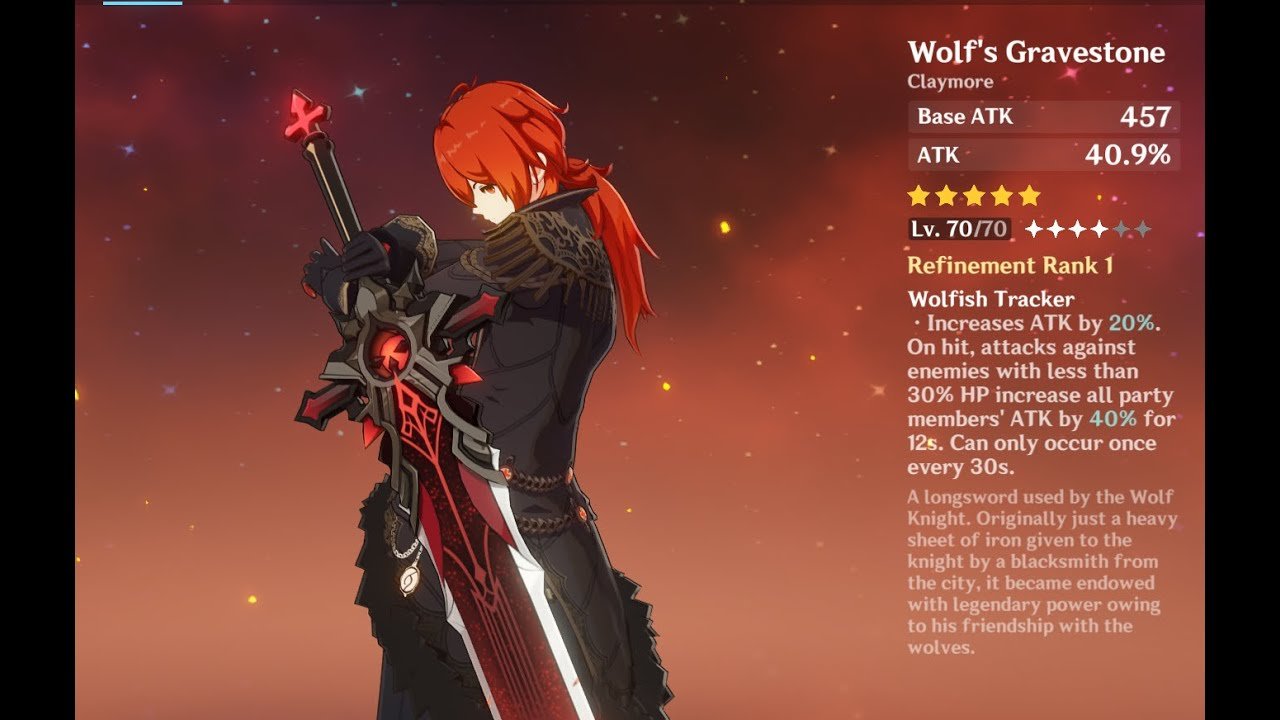 Genshin Impact, the hype is real and the game is solid but I must say that after playing Genshin Impact for over 100 hours, I’ve realized the importance of weapons as well as artifacts. Among the weapon grades, it is seen that Claymore users are most likely to deal heavy damage, while Sword users have speed and agility in their hands.

The reason why just love claymore characters is that they are just too much fun to play with. Even take, for example, Razor, when you give him the Debate Club, he can really bash people up and with the 120% additional bonus damage chance after you refine your weapon, Razor becomes really good at bashing enemies.

Even Diluc, we all know, is one of the best Claymore users and he is built, made, created, sculpted, and crafted to use Claymore. Even if you haven’t unlocked him yet which is actually pretty hard, if you have him on your team, you are seriously lucky man!. Diluc is just amazing and his ability causes havoc to enemies, especially the Ice Abyss mage, I’ve been able to finish him off within a few hits using Diluc and Diluc just makes Genshin Impact so much more fun.

But now, you might be wondering, which Claymore should you go for. Because in Genshin Impact, resources are limited and there’s only one or two items that you can really cash on. Even characters, you got to choose them wisely and spend your gems, hero’s wit and other enhancement tools very wisely because you cannot level up all you characters just because you want to.

Here’s a list of Claymore that I potentially think that you should go for not because they deal a lot of damage but because they help you in your game progress.

Honestly, this is by far the best Claymore in the game. Of course there are the high tier ones but those five star Claymore’s aren’t going to help you in your game journey at all because you need to remember that there’s upgrades, enhancements and refinements to make to your weapons and getting 5 five star Claymores is just impossible.

Prototype Animus is a Four start Claymore weapon suited for Razor, Dilus, Noelle, and many other Claymore users. I’d say if you unlock characters like Razor or Noelle, you should work on farming this beast because let me tell you that this Claymore is a boss killer and mob blaster.

Its main ability is that it gives the bearer, a 50% chance to deal 240% damage at refinement level 1. Now that is absolutely insane guys and if you reach refinement rank 5, it deals up to 480% extra damage.

If you are reading this, Razor at level 40 with average attack damage of 300. Add 480% to that 300, it becomes 1740 DMG! period. That is insanely godly because that level of damage can only be achieved by a level 60+ player. Add artifacts, and other boosters and you can only image how crazy this weapon can get.

The only downside to this weapon is that this damage can happen once only after 15 seconds and that also at a chance rate of 50%. However, one big blow every 15 seconds is still a crazy deal.

Second on the list is Royal Greatsword. You may have seen this Claymore in your Wish tab and it will cost you 24 Starglitter’s. This means if you are really progressing well on your Primo Gem Collection, you can easily get multiples of this sword by collecting Starglitters.

If you are new to Genshin Impact, Starglitters are gained if you get multiple characters while using your Wish. This means if you get 2 Razor’s, then, the next one will be converted into 2 Starglitters. Honestly, one of the worst ways to collect characters and weapons but there’s no option here for us.

But coming to the weapons, if you are going farm Claymore, the 2nd best choice is definitely going to be Royal Greatsword. To really be able to max out this weapon by the mid to mid-late game, you will need at least 3 to 4 of these weapons for increasing refinement ranks. To get 3 to 4 of these is going to be expensive which is the reason why choosing the right claymore in Genshin Impact is very important because most of the time, you will not be able to switch at all. Anyways, coming to getting this weapon, you need to collect Primo Gems as much as you can. I’d say, just save up and don’t spend your primo gems at all. Once you reach a point where you have at least 10k to 15k primo gems which eventually you will once you reach mid-game, you can easily get this weapon through star glitters. However, you might need to purchase a lot of wishes.

Why Royal Greatsword? – It is basically because of the crit rate. It can give the bearer, an 8% increase in Crit rate after hitting an enemy and this rate stacks up to 5 times until it hits an enemy with a crit damage. If you refine this weapon, you can get upto 28% to 32% Additional crit rate that stacks upto five times. Meaning 32% X 5 = 160% Crit rate. Now, that’s pretty good because this weapon is very consistent in giving off such a level of Crit Rate.

Characters like Razor and Diluc can take full advantage of this weapon because their builds and talents normally are just based on pure Crit Rate and Critical Damage. However, if you want even more, you can further increase it by using Artifacts that specifically increase your crit rate.

Overall, the Royal Greatsword is my second choice until mid game. And of course 160% Crit rate is not a joke at all and it can cause Havoc for your enemies, and it is basically a mob killer.

The next on the list is Wolf’s Gravestone and I heavily recommend this Claymore in the late game because it can be hard to farm this weapon. You can only obtain this weapon through Wishes and of course being a five star graded weapon, getting 5 of these Claymore’s can take a lot of time. However, if you want an all rounder, attack booster, this is a great weapon.

However, one downside is that this attack buff only occurs every 50s so, the attack boost is not very consistent. However, the amount of damage that this weapon is able to do is marvellous, especially at higher levels.

But I would not go for this weapon unless, I unlock characters like Razor, Diluc, and other heavy damage characters.

The Sacrificial Great Sword is a 4-star weapon that can only be obtained through the Genshin Impact’s Gacha System that includes using wishes to obtain items and weapons.

After just looking at the stats and abilities of this weapon, it doesn’t deserve to be a 4-star weapon but luckily it is and if you are thinking to farm and keep a weapon with you until late game, this is the best weapon. Especially, if you want to spend your wishes wisely.

The main ability of this weapon is that it gives you a chance to reset your Elemental Skill Cool down with a chance rate of 40%. Moreover, this can only occur every 16s which isn’t bad at all. This weapon can help you deal good amount of damage using characters like Diluc and Razor who have a really good Elemental Damage skills.

It also gives you a good boost to your energy recharge rate as you level up your weapon.

The Black Cliff Slasher is another great weapon. You can obtain this weapon through Paimon’s Bargains and it is a really good weapon for lasting until late game.

Another great thing about this Claymore is that as you level up, you can get a good boost in your Crit Damage.

This weapon, I won’t say it’s mind-blowing but compared to other 4-Star weapons, it’s a heavy damage dealer. If you are not able to get Wolf’s Gravestone, you can farm on this one and you also easily get through Paimon’s Bargains so, Ranking up the Refinement levels is not an issue at all.

10 Facts about lisa in genshin impact