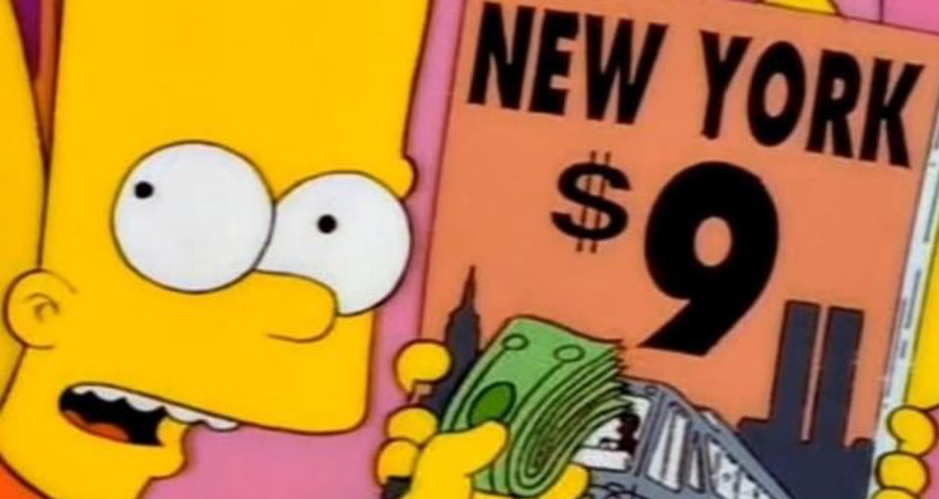 Simpsons is definitely one of the best cartoons and the all-time best cartoon series which is loved by all. The cartoon show has been running for more than 20 years and it’s just fun to watch it every single time. If you are a fan of Simpsons, then there is a mobile game for Simpsons too!. The characters and everything about Simpsons is amazing.

1. The futuristic concept of smartwatches

Let’s enter the world of technology first. The Apple watch that you are wearing right now looks cool and futuristic with the ability to talk to it and give it instructions.

If you think, you have created the concept of it, well Simpsons did it first. In the 1995 Simpsons Episode Featuring Fortune Teller, we see that Lisa’s future fiance is seen using a watch and taking to it.

The smartwatch was not yet invented until 2013 which is 18 years from 1995. How did he know that smartwatches were going to be used in the future, well your thoughts?

2. AutoCorrect in your smart phone

Just a year before the prediction of smartwatch, in 1994, in an episode featuring Dolph and Martin, Dolph writes in his phone, “Beat up Martin” which the tech auto-corrects it to “Eat up Martin”.

This auto correct feature was invented in 2005 by Dean Hachamovitch which is about 11 years later the prediction.

Even the Apple CEO, Steve Jobs was influenced by the series of Simpsons and used this simple cartoon joke as one of the most used features in Smartphones.

Weirdly enough, you can see an Apple below the phone, which resembles our Apple today.

You might be wondering who invented the 3D printer, according to Google, its Chuck Hull but Google is wrong for today because Simpsons had already predicted the wide use of 3D printers.

In 2005, in one of the Simpsons episodes, Marge is seen taking a picture of a couple, she clicks the picture and when the picture comes out of the camera, it turns into a cake with a picture of the couple in it.

This was certainly a prediction of 3D food printers which was being used only 9 years later.

Who would have ever imagined that one day, we would be using a tiny camera capable of recording underwater sharks to sky falls and so much more. In an episode of Simpsons, Homer was asked to wear a hat fitted with a hidden camera that is quite similar to our GoPro today.

He was told to find out who is selling the spoiled food in the supermarket. 20 years later, we see this as GoPro.

In the real world, it is a true fact that NSA does know every secret bit of us. The NSA in 2020 has a lot of information they need about our identity and they keep an eye on our actions and behaviors. Our personal data and identity are definitely being watched by someone at the NSA.

With the introduction of som many social media applications and technology like Alexa, who knows if that message or picture that you sent to your girlfriend might be seen by a guy in the NSA.

One of the major crises that happened in 2015, the Greece Bailout Crisis. This crisis was when Greece was not able to pay its debt and was on the verge of being a bankrupt country.

The Simpsons knew this way before any economists could predict. In one of the Simpsons scenes in a television interview with Homer, a news ticker on the screen flashes “EUROPE PUTS GREECE ON EBAY”.

This may seem like a joke but people say that it has some deep political message. Which could be the Greece Bailout Crisis in 2015.

7. The outbreak of EBOLA

Remember the massive outbreak of the Ebola virus that put everyone in fear. This tiny virus which killed more than 11,000 people in Africa and left thousands of people disabled.

Simpsons had already predicted this major event all the way back in 1997 in a scene where Bart who is lying on the bed and is sick, Marge offers him a book named “Curious George and the Ebola Virus”. In 2014, The Ebola Virus outbreak occurs. Coincidence?

In an episode in season 25 of Simpsons, a football federation representative asks Homer help to fix their image after their corruption charges as many of the leaders were taken down.

Not only that, the Simpsons also predicted that Germany would defeat Brazil in 2014 World cup.

Do you know this famous Miley Cyrus song “I came in like a wrecking ball”?

Homer did that exact same thing back in 1994 and in the Simpsons movie.

Although this might not seem like a prediction who knows if the writer came into the future and heard this song, went back to 1994 and included this in the Simpsons.

One of the major Lady Gaga’s events where Lady Gaga was seen soaring high up in the event with ropes and cables attached.

A similar thing is seen in one of the Simpsons episodes where a Lady wearing a similar costume does the exact same thing!.

One of the world’s most disastrous events, the 9/11 where the World trade center tower was attacked. In one of the Simpsons scenes where there is a brochure saying “$9 a day”, behind the nine there are two towers.

How can a cartoon writer know so much about world events?. Is he really a time traveler?. He is definitely a time traveler and this picture of 21st-century fox is yet another accurate prediction of Simpsons.

Trump being the president in 2016 made headlines all over the world and put America into one of the most awkward situations ever.

However, The Simpsons accurately predicted this event all the way back in the year 2000. 16 years later, Trump is the President of the USA.

But wait we have more!.

Here are some of the possible predictions for the future that Simpsons has predicted and it is yet to come true.

In one of the Simpsons episodes, we see that Lisa is going to a Fortune Teller who tells her that she will marry a British man. Later in the scene, we see that London’s Big Ben has a digital clock.

London’s Big Ben has gone through a lot of repairs over the years and many times, it has been silent. This means that it could be a possibility that the Big ben would have a Digital clock.

In of the Simpsons episodes, we see that Homer and Lisa is actually wearing VR glasses attached to a machine through which they are tasting and eating food.

With the advancement of technology and Virtual Reality, who knows one day we may be able to convert taste into computer files and upload it into VR and use some kind of Machine to taste it.

Who knows, we could actually save taste like memory and store it into our hard drives or be able to taste the food before ordering it online.

This is one major Simpsons predictions which is yet to come true.

Elon Musk is definitely on the work towards colonizing Mars very soon and although this might be already predicted but it still hasn’t come true yet. In one of the Simpsons scenes, we see Lisa and Homer planning to move away from home, Lisa says she wants to move to Venus. If we take the irony and possible prediction clues, it definitely mars which we are about to colonize. And this colonization is about to happen as early as 2022.

This was all the major predictions that actually came true. Simpsons have been running for more than 20 years and in this lifespan, it has over 30 seasons and 650 episodes. In all these years, they have already made over 1000 predictions and some of them are yet to come true.

Thank you guys if you enjoyed reading this!

Till then Have a great day and Keep gaming!.